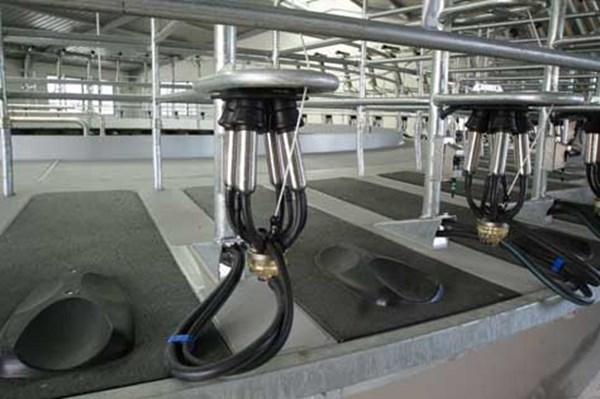 Hand teat spraying is the most common method used in New Zealand and one of the most laborious jobs performed during milking.

Waikato Milking Systems have developed an automatic teat spray system suitable for use on rotary platforms that is positioned in every bail and activated by a signal from an electronic cup remover.

Normally when a set of cups is removed by an automatic cup remover they are simply parked in the bail. The advent of SmartECR’s now permits the use of bail gates that are automatically raised so that cows can be released at the exit position.

With the integrated power of SmartECR’s, when a cup remover activates it can also activate an automatic teat spray system.

Two spray nozzles carefully positioned in each bail cater for a wide variety of animal sizes. The Smart Controller allows you to program the spray duration and spray delay which means that all cows are sprayed with the right amount of teat spray at precisely the right time and soon after cluster removal.